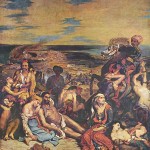 A man is wanted by police after he was filmed racially abusing a minicab driver in London.

The incident on Sunday 22 March shows the man – described as white, approximately 6ft tall and wearing a charcoal grey suit – refusing to pay his taxi money and spitting at the drivers.

CCTV from inside the cab shows him climbing out of one of the vehicle’s windows and shouting rude words, some of a racial nature.

The victim, a licensed minicab driver, had picked up a man on Camberwell New Road at approximately 2.15am. A short while later the man started to shout at the driver; the driver eventually stopped the cab somewhere in London, at around 2.30am and asked the man to pay his fare and leave.